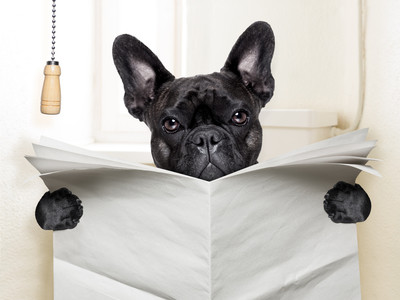 We give you some tips on how to toilet train your puppy – it’s all about routine, reward and reinforcement…

From about two to four months of age, most pups pick up on the concept of house training or crate training quite easily since its part of their natural programming. Many puppies and dogs can be housetrained in as little as two weeks. Number one rule of toilet training your puppy is that you need to be there as much as possible in the first few weeks.

You need a regular feeding routine for a predictable toilet routine – Five to 30 minutes after your puppy eats, she’ll want to go for a pooh. So with a consistent eating schedule, and your eye on the clock, you’ll know when to bring her outside.

In addition to your ‘after eating’ routine, you should take your puppy out every hour on the hour when you’re at home. When you can’t watch your pup, put her in a ‘safe area’ (like a puppy crate, or other small, confined area like a bathroom or utility room – an area with a very obvious bed and the rest covered in newspaper). She won’t generally soil her bed, just pee on the newspapers which is easy to clean up (with one part biological washing powder and 4 parts water or a purpose-made cleaner from the pet shop).

Always go outside with your puppy – don’t talk to him until he’s relieved himself, then lavish him with praise. If you start talking to him before he pees he’ll think he’s there to play, even if it’s the middle of the night!

Put some pre-peed on newspaper where you want them to go outside, for consistency between indoor and outdoor surface.

After a few weeks the pup will smell their own scent and recognise the look and feel of the newspaper. Slowly remove the paper from nearest the bed so he has to travel further afield and make an effort to get to the newspaper.

As long as you are there to let puppy out, you should remove the paper completely from inside at this stage, the only paper should be outside. Make sure puppy’s bed is close to the door you want him to go out through to the garden – this way he’ll let you know when he gravitates towards the door.

Don’t punish your puppy for an accident or do anything to create a negative association with going to the toilet. Stay calm and assertive and quietly remove the puppy to the place where you want him to go.

The old wives tale about rubbing your pup’s face in its pee or poo is just cruel and doesn’t work. In fact, any negative vibes may mean your puppy will just hide from you when going to the toilet in future, making training impossible.

Remember accidents or mistakes are your fault, not the puppy’s!