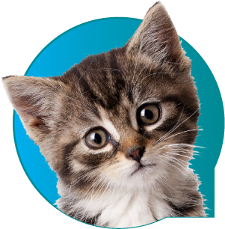 … from interesting, to funny, to just plain weird – we share our favourites

Humans have 2-10 million olfactory cells (these give us a sense of smell), whereas cats have 60-70 million and dogs have a whopping 80-220 million. And it’s the other way around with taste buds – humans have loads (9000); whereas dogs (1700), and even more so cats (473), have much less. All this means that the way cats and dogs choose their food is much different to how humans choose their food. As long as it smells good you’ve pretty much sold it to them; but humans are far more complex, it has to look good, smell good, taste good and have a good texture.

Unlike dogs, cats do not have a sweet tooth. Scientists believe this is due to a mutation in a key taste receptor.

A dog can locate the source of a sound in 1/600 of a second and can hear sounds four times further away than a human can. Dogs don’t like rain because the sound is amplified and hurts their very sensitive ears.

The phrase ‘raining cats and dogs’ came from seventeenth-century England – during heavy rainstorms, many homeless animals would drown and float down the streets giving the appearance that it had actually rained cats and dogs (ooh, that’s not very nice).

French poodles didn’t originate in France, but in Germany – ‘poodle’ comes from the German word ‘pudel’ or ‘pudelhund’ meaning ‘splashing dog’. Some scholars speculate the poodles puffs of hair evolved when hunters shaved the poodle for more efficient swimming, while leaving the pom-poms around the major joints to keep them warm.

The smallest dog on record was a matchbox-size Yorkshire Terrier. It was 2.5 inches tall at the shoulder, 3.5 from nose to tip, and weighed only 4 ounces at the age of 2yrs.

Dogs and cats nose prints are as unique as human finger prints and can be used to identify them.

Pets are good for your health and wellbeing: Petting dogs is proven to lower blood pressure of dog owners. Apparently, people who own pets live longer, have less stress and have fewer heart attacks than people who don’t. Most pet owners say their pet makes them smile more than once a day.

Wee tales: Different smells in a dog’s urine can tell other dogs whether the dog leaving the message is female or male, old or young, sick or healthy, happy or angry. Male dogs raise their leg while peeing to aim higher up a tree or lamppost because they want to leave a message that they are tall and intimidating. In Croatia, scientists discovered that lampposts were falling down because a chemical in male dog urine was rotting the metal.