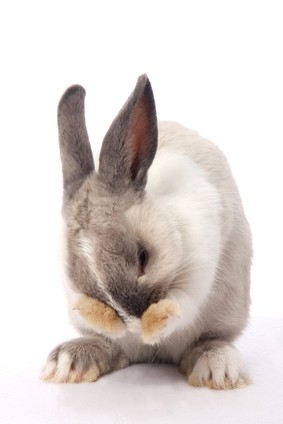 Rabbit Awareness Week (RAW) culminated at the weekend (18th May) with the Rabbit Grand National in London’s Earls Court, where Swedish bunnies were flown in to showcase their speed and agility by hopping over hurdles. We kid you not! Check out their hopping feats here. It’s pretty amazing stuff.
Rabbit show-jumping has been going on in Sweden for well over 20 years now. Norway, Denmark, Germany, the US and Australia have all joined in as well (for the history of rabbit show-jumping click here.)

The RAW campaign hopes to help pet owners to improve rabbit welfare and make changes in their rabbit care routine. Rabbits are the UK’s third most popular pet, but also the most neglected; often due to owner’s ignorance of the welfare requirements of looking after a rabbit rather than intentional cruelty or neglect.
Rabbits need a suitable environment and proper exercise. In the wild, rabbits live in social groups within large territories. Animal welfare charities, the PDSA and Rabbit Welfare Association and Fund, say a hutch should be no smaller than 6ft (1.8m) long, 2ft wide and 2ft high. But both recommend pet owners provide rabbits with much larger enclosures than the minimum size, as well as a big run. Also, rabbits should be kept in pairs.
A recent study of pet owners who were going about getting a rabbit as a pet found that 60% of them planned to have an enclosure which was either the same, or smaller, than the recommend minimum size. The research also suggested that 41% intended to keep their rabbit on its own.

The following websites have lots of useful information on caring for your rabbit, and understanding their needs:
http://www.rspca.org.uk/allaboutanimals/pets/rabbits
http://www.rabbitwelfare.co.uk/
To keep up to date with RAW check out the facebook page: https://www.facebook.com/RabbitAwarenessWeek