Your dog can make you feel younger 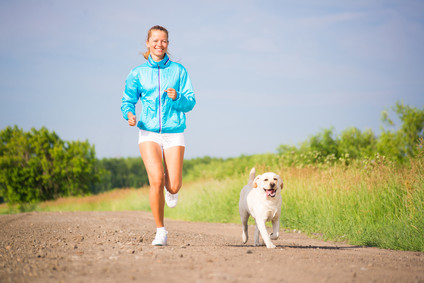 But contrary to some media embellishment of a recent study on the effect of dog ownership on physical activity of older adults, your pooch won’t actually make you look younger, so don’t throw away the wrinkle cream just yet!

The St Andrews University study found a difference in physical activity between dog owners and non-dog owners of around 12%. This was reported by the authors as being the same as the difference between people who are 10 years apart in age (hence the media interpretation of dog ownership making you appear 10 years younger!!).

The study measured physical activity levels of 547 older adults in Tayside, Scotland. The average age of the participants was 79. Fifty people (9%) owned a dog, and their average age was 77. After taking factors such as weather, environment, medical illnesses and socioeconomic status into account; dog owners were 12% more physically active than people who did not own a dog.

For an accurate summary of the findings read what the UK National Health Service (NHS) has to say about it http://www.nhs.uk/news/2014/07July/Pages/Owning-a-dog-may-make-older-adults-fitter.aspx
The results of the study led the researchers to suggest that public health officials should consider setting up schemes to lend dogs to those without them to increase physical activity. Not a bad idea…

There are already some private dog lending businesses around (for example, https://www.borrowmydoggy.com/; the Irish Examiner has an interesting read on the business: http://www.irishexaminer.com/lifestyle/features/dog-borrowing-service-barks-up-right-tree-242854.html).

The results of this study are consistent with results of numerous other studies that show that older dog walkers get more exercise than their non-dog walker counterparts.

Here’s a quick summary of some research findings on the subject:

So once again, the faithful companion comes up trumps!